What VAERS Data Reveal About Cardiac-Related Reactions to COVID Vaccines

What VAERS Data Reveal About Cardiac-Related Reactions to COVID Vaccines

We are exactly two months into the COVID 19 vaccine rollout, which began on Dec. 14, 2020. Each Friday The Defender  reports on the latest vaccine reaction numbers from the Vaccine Adverse Event Reporting System (VAERS) database.

As of Feb. 4, 12,697 reactions, including 653 deaths, had been reported to the system, out of 35 million doses of vaccines administered.

The Centers for Disease Control and Prevention (CDC) is using the VAERS system as an passive reaction surveillance tool following the fast-tracked, Emergency Use Authorization of the Pfizer and Moderna vaccines. Other systems being used are V-Safe and the Vaccine Safety Database.

We looked at the data we have so far to see if we could identify any emerging patterns. What immediately stands out is that the 12,697 reactions reported as of Feb. 4 are not limited to injection-site reactions. These appear to be serious reactions reported by medical personnel from all over the country.

One trend worth noting is the number of reported cardiological reactions, including myocardial and tachycardia disorders. We found 1,171 cases using the more common symptoms reported, including 134 cases where the patient died — or 21% of the total COVID vaccine deaths reported to VAERS.

Temporality and strength of association are major contributors to causality according to the most robust diagnostic criteria used by doctors, the Bradford Hill Criteria:

“Temporality is perhaps the only criterion which epidemiologists universally agree is essential to causal inference.” and “the larger an association between exposure and disease, the more likely it is to be causal.”

If we compare the 653 COVID-19 vaccine death reports to flu vaccine deaths reports, a shocking statistic emerges. There have been only 20 flu vaccine-related deaths so far in the 2020/21 flu season when more people received the flu vaccine than ever before — 193.6 million doses, and only one of those reported deaths was related to a cardiac disorder.

This means that so far, with only 35 million COVID-19 vaccine doses administered (as of Feb. 4), numbers of total reported deaths and also cardiac-related reported deaths are already exponentially higher than deaths reported following flu vaccines.

We understand that causality has not been determined to be the vaccine, but we do know that the CDC uses the VAERS system to monitor for serious signals. Could this be one of the most serious? Is it possible that the Pfizer or Moderna vaccine contribute to heart problems?

Some doctors think so. We know that the mRNA vaccines program cells into producing the spike protein to arm the immune system against an infection. What if the spike protein the body generates is also contributing to heart problems the same way that the virus would?

We know from recent research that the COVID-19 spike protein alone, without the virus, appears to be the culprit that triggers a cascade of events that results in inflammation and the formation of microthrombi (small blood clots) in vessels throughout the body. So it makes sense that many of the adverse reactions that we will see from the mRNA vaccines will parallel the injuries we also see from the COVID-19 infections.

The U.S. is not the only country to report these symptoms following the vaccine. The UK government’s “Yellow Card” system has so far reported 590 cardiac disorders for Pfizer and 12 fatalities, and 212 reports for the Astra Zeneca vaccine, including one death.

The World Health Organization’s (WHO) vaccine injury reporting system, “Vigiaccess” has recorded 3,234 reports relating to cardiac disorders. Vigiaccess is a database of reactions of reports from 142 countries, but so far the 67,277 COVID 19 reports are mostly from Europe (81%), the U.S. (19%) and Asia (1%). It is unclear if there is duplication with VAERS and Yellow Card system.

Both the UK’s and the WHO’s systems are not accessible by the public, so further scrutiny is difficult without assistance from the respective agencies. As with VAERS, there is always a causality disclaimer which usually serves to dismiss all reactions despite temporality or  association between exposure and disease. 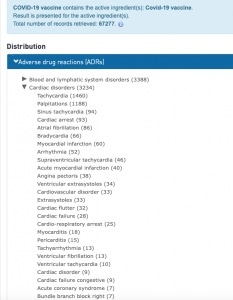 For now, we can only use these systems as helpful tools to see if there are signs of inherent dangers in these experimental vaccines that may be cause for alarm.

The details of the cases on VAERS relating to cardiac disorders merit the highest medical scrutiny, if for no other reason than that they account for 21% of the deaths reported in the first eight weeks of the vaccines’ administration.

Unfortunately, the CDC and the media collectively sing the praises of the vaccines’ success, while silencing those who dare to ask the important questions that need to be asked about safety.

On Feb. 10, the Instagram account run by Robert F. Kennedy, Jr., was removed for questioning the very data highlighted here. In response, Kennedy issued a statement which included this observation:

“The pharmaceutical industry is hastily creating vaccines using taxpayer money and untested technologies. These include a rash of risky new products that are exempt from liability, from long-term safety testing and that have not received FDA approval. Emergency Use Authorization is a mass population scientific experiment. If it has any prayer of working, it will require extraordinary scrutiny from the press and the public.”

To help the fight in Canada register:
https://awakecanada.org/register/