A CBS News story earlier this week sounded a recurring alarm about the record decline of birth rates in the U.S.

The news agency obtained records from health departments in more than two dozen states showing a 7% drop in births in December 2020 — nine months after the first lockdowns began.

As the Pew graph below illustrates, the overall drop in birth rates actually began in 2006. 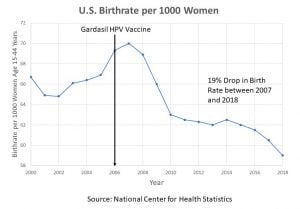 Baffled “experts” blame everything from social media to the economy. But they overlooked one obvious possible explanation: the Gardasil HPV vaccine, which the Centers for Disease Control (CDC) and Prevention’ Advisory Committee on Immunization Practices recommended for every American girl between the ages of 9 and 26 — beginning in 2006.

Clinical trial researchers for Merck, Gardasil’s manufacturer, reported an explosion of reproductive injuries among the 20,000 trial volunteers. An astronomical 15% – 17% of trial participants experienced a range of reproductive harms, including premature ovarian failure.

CDC’s own graph shows that the steepest drops in births have occurred among teens — the age group most likely to have received the vaccine. Among this group, birth rates dropped a breathtaking 46% between 2007 and 2015. There were no changes in birth control or abortion rates that would explain this drop. 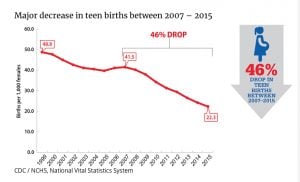 During our Gardasil litigation, we have spoken to hundreds of girls suffering premature ovarian failure and a range of other reproductive problems. Gardasil victims and their mothers frequently tell us of girls who cease menstruating after receiving the Gardasil vaccine.

Merck knew that it was orchestrating a population-wide fertility experiment when it persuaded the CDC to effectively mandate Gardasil for every American teenager. Merck’s pre-licensing studies predicted the current national drops in fertility.

If Gardasil injured you, and you want to know your rights, call me at 844-RFK-HPV1.

This is the fifth #Gardasil lawsuit @baumhedlund and I have filed against Merck, challenging the company’s dangerous and defective #HPV #vaccine for causing severe and life-changing injuries. #TheDefenderhttps://t.co/o5mIaT7rWb