Lytton Death due to Moderna Vaccine, and 3 permanently disabled.

Lytton Death due to Moderna Vaccine, and 3 permanently disabled.

900 people in Lytton administered with the Moderna vaccine. 1 death. 3 permanent disabled. Doctor on gag order, but refuses to stay silent.

The below images are shots of the letter. 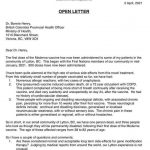 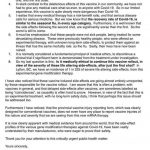 Here is a bitchute video of him speaking out.
https://www.bitchute.com/video/ouRLgvKKqQgh/