We are living in times, where no one can be certain on what we see is real or not.

The mainstream media is certainly lying to us.  WE also know that there is a lot of videos and misinformation on our site of the fence too.  So how do we know what is real and what is not?

We are asking the wrong question here.

What we really need to be asking ourselves, is what am I going to allow into my mind to be real or not.  I personally challenge all information that I see.  This is just a good way to live, pre-covid or post covid.  What I have learned here is, that there is A MASSIVE AGENDA to SCARE the population into submission.  So when us “woke” people are not scared of a virus, then they change the game to scare you of tyranny.  There is clearly tyranny happening all around us, but what is real and what is not?

For instance, I seen an article on our facebook page today, and it was purportedly saying that BC is ramping up its policies on enforcing mask bylaws, and get togethers.  However, look at the article. 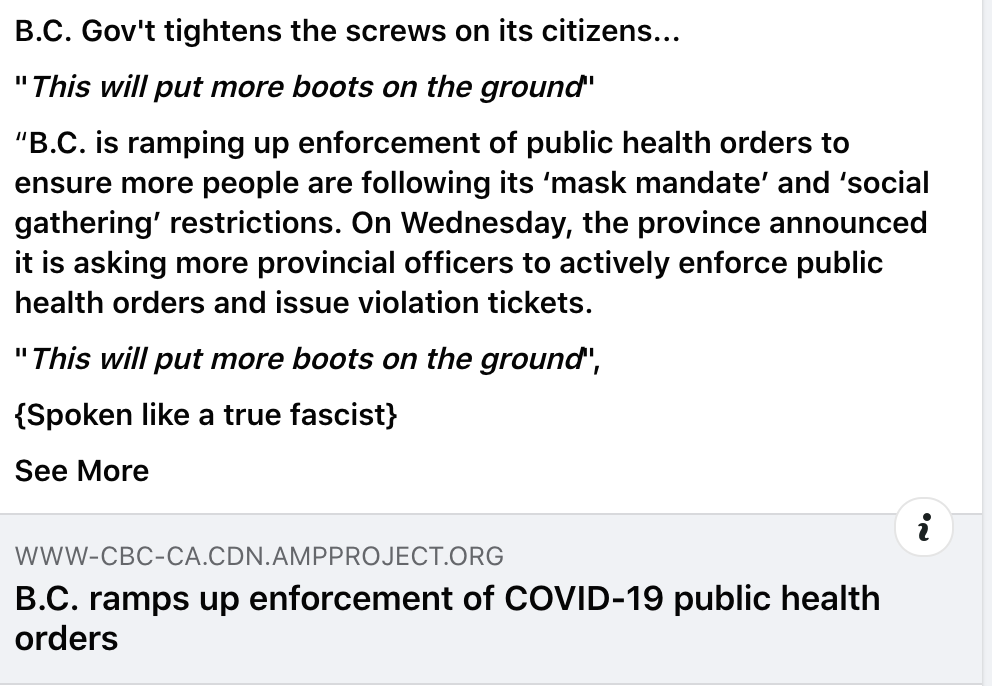 Upon inspection lit looks like a CBC article.  Even when you click through to the article, it looks like the CBC site.  They even have the CBC logo in the browser bar.  So most people that are not paying attention, would take this as a news announcement.

HOWEVER…… IT IS ALL AN ILLUSION CREATED TO INCITE FEAR!!

I have been internet marketing since 2003.   Facebook advertisers have been doing ads like this for years.  Ones that look official from an actor going through turbulent times, and it peaks your interest and you click through to the ad.  When you get to the ad, the problem the actor had was solved by a miracle supplement, and then you go… ah fuck… Taken again.

This is the same thing.

Whoever is running this agenda… (ahem, Bill, I mean George) they are buying what we call in the internet marketing world PRESS RELEASES.  They go out to 1000’s of independent journalism start ups, many of which these people have setup.  In fact, the fact checkers are all funded by Bill and George, and this has been publicly available to know this for 6 months when fact checking first started.  We all know what is going on with  that.   What you did  not know is that Facebook is being sued EPICALLY right now.  By not one lawyer, but thousands of lawyers.  They are in so deep, that they just keep on going with their scams, because they are too far in to quit.  Just like all the other criminals running this illusion.  They are in so deep, they know if they don’t win, they are going to be busted for sure.  The only way they can win, is to take complete control over all nations.

Hahahahahahahahaha.   Good luck with that losers!!  You overplayed your hand.  The human race might have been asleep, but we are not that stupid.

So, the right people in power are rising up against this.

And the wrong people in power are too.

So what do we do to escape this illusion?

You get the fuck off the bus.  You stop playing.  You turn off CBC, GlobalNews, and all other News.  If you are going to be on facebook, REJECT all news.  Start creating your own reality.  And here it is.

You are a FREE PERSON, WITH YOUR OWN FREE CHOICES.  NOBODY, will make you take a vaccine, because it is your body.  They might try to make life complicated for you if you don’t.  Sure they will try.  If they are not all in jail by this point.  As these vaccines rollout, the step up against this agenda is kicking into high gear.  Have faith.  Stop falling for the illusions you see.  This is all fear propaganda designed to make you fall.  For you see, when you learn the truth about how much power you have, nothing will scare you anymore.  Not being arrested, nothing.  Do you know why?  Because it is all a temporary illusion.

Here is the real truth, the only truth, and the only thing you have to wrap your head around.

When you start to live your life FULLY, like you did before Covid, (I am hoping better for you), and do whatever you want to do, have as many friends as you want too, take off your ridiculous mask, shop where this is accpetable, and shut out all the noise, you will be free.  You were always free.   You are in the illusion that you are not.  An illusion created by people spending Billions of dollars to keep you in this illusion.  WHAT A WASTE OF MONEY!!  They could have solved all the world problems.  Do you know what that makes them?  STUPID, and POWERLESS.  They hide behind the curtains, like the OZ in the wizard of oz.  We are about to remove the curtains, to find small, weak, frail, losers like Bill Gates, and George Soros, Klauss Schaub.

I think as children they must have been hated.  They never found love, peace, or friends.   Their lives suck.  They think power, and money is the answer, but they keep chasing for more and more, never to have their appetites answered.  This is because they are empty.  They are trapped in their own illusion, so therefore, they have decided to try and trap everyone else with them.  And control them.  Guess what?  They only way you can be controlled is if you are full of fear for not obeying their ridiculous orders coming down a long line of corrupt chain of command.

Where they went wrong is, that they thought that everyone could be corrupted.

That everyone could be brought into submission with Fear.

I must say it worked for awhile.  Even on me.  But not anymore.   You see, the reason why wars for the most part have been won by the good guys, is because as soon as you figure out that you would rather die a free man, than be a living slave, there game is over.  OVER.

And that is where we are at.

So do you want to live as slave?  Or do you want to live as a warrior, unafraid, and ready to do whatever it takes?  Ok then.  Its simple.  You don’t have to get on a boat to China to fight on the shores.  Your fight?  Take your ridiculous face diaper off.  Walk freely, with your head high, and realize, that there is no virus out there that is going to take your life, or anyone else life because you are a carrier.  OMG, that was the biggest illusion of all.  Making people think they are responsible for other people’s health.  How did you fall for that?  Anyways, it doesn’t matter.  You won’t anymore.  The curtain has been lifted.

Live, love, prosper, and ignore all ridiculous rules without fear of consequence.  We all pay consquences for every action we do.  But right now, you will pay a bigger consequence for NOT DOING ANYTHING!

Live, love, and prosper, and step out of the illusion.  Its easy.  Do it!